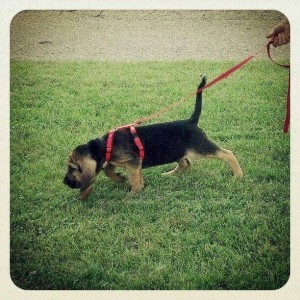 The idea of using a tracking dog to find a lost dog is very compelling, but most people who pursue this option do not have a good understanding of how a tracking (or trailing) dog works.  In some cases a tracking dog CAN provide useful information for locating a lost dog such as confirming sightings or establishing a direction of travel.  However, very few lost dogs are actually found and captured during the search (i.e. a “walk-up find”), which is what most people are hoping for when they hire a tracking dog team.

What many people do not consider is that there are actually some cases when you should NOT try to use a tracking dog to find a lost dog.  In these situations a tracking dog is not only a waste of money, but they can actually be detrimental to finding and catching the lost dog.  The situations where you should not use a tracking dog to find a lost dog include most cases where there are multiple sightings of the lost dog in a general area, and the dog is running in fear from everyone.  This most often occurs with newly adopted dogs and skittish lost dogs.  However, even an otherwise friendly dog can enter what is known as “survival mode” (where they run from all people including those that they know) if they are lost in a frightening situation (such as a car crash) or if they are on the run for several days, especially if people attempt to chase or capture them.  Sometimes these lost dogs will run for several miles (1-5 is common and 10 or more miles is not unheard of), but in most cases the lost dog will eventually settle down in a place where they feel safe.  Generally this safe place is somewhere with food, water, shelter, and (very importantly) where people are not attempting to approach or catch them.  In some cases the lost dog will actually circle around and come back to close to where they went missing.

If you you get multiple sighting (even 2-3) of the lost dog in a general area (hopefully less than 1 mile apart), then the lost dog has likely found a safe place to hide out.  The last thing that you want to do in this situation is chase the dog out of his newly found haven.  If you use a tracking dog, they may help you find out where your dog has been taking shelter and getting food, but in the process you may scare your dog out of the safe place.  Likewise, it is a very bad idea to have human search teams go into this area and look for the lost dog, especially if it is a wooded area.  Even if they see the dog, they are most likely going to scare him out of the area.  In either of these situations, the lost dog may feel pressured to leave the area and find a new safe place, perhaps miles away.

In these types of cases, it is very important to leave the dog alone and encourage others to report sightings, but not to approach or attempt to catch the dog.  Most of these dogs are ultimately caught using lure and capture techniques such as feeding stations, calming signals, surveillance cameras and/or humane traps.

Thank you Danielle of Lost Pet Research and Recovery for giving us permission to use her article.