Juno was out loose for 15 days. She was a shy pup who had been adopted in November. She got loose from her collar from a Petsmart in Schaumburg and any effort to get close to her did not work. 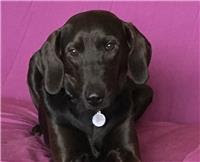 This area of the western suburb was very busy with traffic, businesses and restaurants and close to the expressways. It was a dangerous area for her to be lost in because she could have easily darted into traffic and been hit.  The owners lived some distance from the area where she got loose and for the first week did not really know how to proceed. A few calls had been made to the local police of sightings but the owners thought animal control would catch Juno. They reached out to the previous foster who reached out for help.

A week later flyering was started  and a pattern began to emerge.  Juno had settled near a brewery, Ikea and some brush and water.  A feeding station and cameras were used to help determine better times when Juno would emerge and show herself. Employees saw her and called and were gently reminded to not chase Juno or feed her because a plan of action was in place to  capture her safely.

A humane  trap was set up with food for Juno. She was initially interested and realized the food was near. She ate some, circled some, left and came back and tested her surroundings even though she knew the noises, the cars and her routine. She would stick her head in and out. Juno  was always alert and would also stretch her legs far out even when engaging the trap. After some time, it seemed she was so close but the door bounced down and Juno spooked! She ran away and did not come back that night or the next day.

We kept the feeding station  with a trap set and watched but Juno wanted nothing to do with it. Flyering continued. It was decided to just keep the cameras out and food available without the trap, to give Juno more time to feel comfortable and eat. It worked. She came back several times day/night.

Susan from Lost Dogs Illinois donated their outdoor kennel which her husband had refurbished to make  a trap with a guillotine door. These traps are sometimes used for scared skittish pups and or for pups that may have spooked from conventional humane traps).   Because the traps are large and harder to transport, there use takes time and planning. 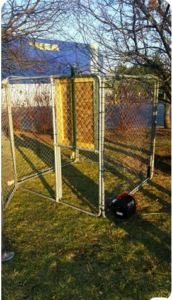 Two volunteers,  Frank and Tom worked on the trap and added  a laser trip function, which runs on a battery charger and 120lb magnetic door. We were able to transport this to the area where Juno was feeding. We assembled it and got cameras up to monitor Juno’s behavior.  Everyone volunteered their time to monitor the cameras and trap.  We never leave a trap set and unattended for safety.

After the trap was set up, it took Juno a full two days to get used to it.  (This could go quick or for some dogs takes days, weeks or longer of slowly moving food inside). On night one Juno was very aware the food was in and around the  trap. She did her dance around the trap and left and came for approximately 5 hours, then left until the following evening. When she returned, she did alot of the same back and forth. But, all kinds of good food eventually overcame her fear and and she safely entered the trap. Gotcha! 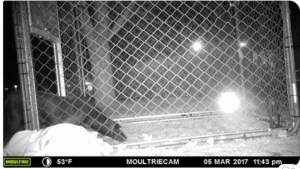 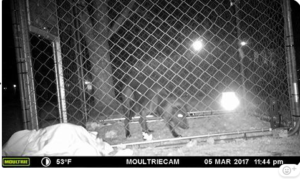 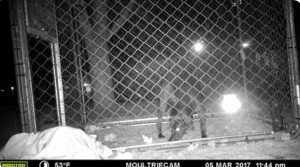 Even though Juno got loose from an unfamiliar area she still stuck fairly close ( within a 2 to 3 mile area).  Flyers generated calls about sightings, cameras helped track a pattern and feeding stations kept Juno coming back.  The patience of using the right trapping procedure paid off. This sweet pup was off the street!  Thank you, Rosanne, for sharing Juno’s story! 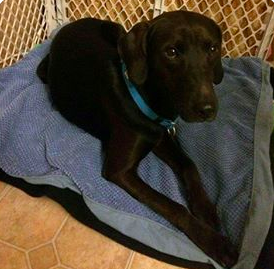