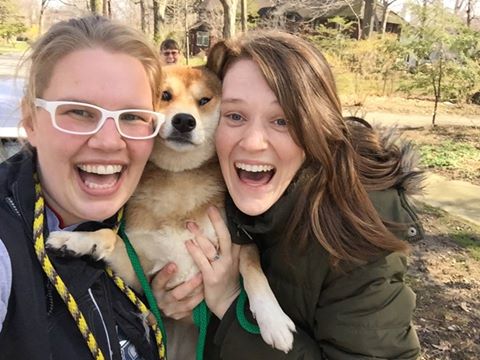 Meagan Corr never heard Roo scratching the door or otherwise asking to be let in on that slushy, late February day the 3-year-old, 22-lb. Shiba Inu disappeared from her Cleveland Heights, Ohio, home.

That was unusual. Roo liked to stay close to home and family.

“She was just four months old when we got her from a puppy mill and not socialized,” Corr said. “We needed a year of caring and rehabilitation just to get her to walk with us in the woods.”

Somehow, for some reason, Roo escaped from her yard shortly after being let out alone that morning.

The couple distributed flyers and alerted police and shelters, as recommended by Lost Dogs Ohio; but a week passed with no leads.

A dog tracker helped Corr create a new flyer and plot out where Roo was most likely to go.  The tracker also brought in her own dogs to scent-track Roo. The dogs were able to follow the scent to the woods north of Corr’s home, but no farther.

“We have a lot of coyotes in the area,” Corr said. “The tracker suggested the dead-end pointed to Roo having been taken by a coyote. They don’t leave much behind.”

On March 15 – 19 days after Roo disappeared – Corr posted what she thought was a final tribute to her dog on Facebook.

“We are devastated that the results [of our search] strongly indicated Roo was killed by a coyote on the north side of Forest Hills Park,” Corr wrote. “We are heartbroken, but relieved to finally have closure.”

Four days later, though, people started calling to say they saw a dog that looked like Roo in Shaker Heights – 15 miles south. A woman called on March 23 and sent Corr a picture she took of a loose dog in that area.

“We drove there, found Roo and called to her, but she ran off in the opposite direction,” Corr said.

People kept calling with sightings. Finally, on March 26 – the day before Easter – Corr got a call from someone who had seen a flyer.

“He said he was looking at Roo as we were speaking,” Corr said. “My sheltie, Maple, was with me in the car when I got the call. We were only 10 minutes from where he said Roo was, so we raced over there.”

Corr eventually spotted Roo in someone’s yard. “She was near a shed and looked scared,” Corr said. “I gave Maple a command to bark, to see if Roo would recognize her voice.”

She did. Roo stood up, saw Maple running towards her — and offered her a play bow.

“It was like Maple filled in the blank for her – ‘Oh, that’s Maple, and there’s that human I kind of like, too,’” Corr said. “I didn’t even have to approach her; she ran over to me and jumped up on my leg with joy!”

How Roo managed to get south of her home when her scent indicated she had gone north remains a mystery.

“I’m told scent can travel through the air, and maybe that’s what happened,” Corr said. “It just shows that you can’t predict flight-mode behavior when a dog goes missing.

“All I know is that it’s kind of like the perfect story for Easter. We thought Roo was dead, and she came back to us.”